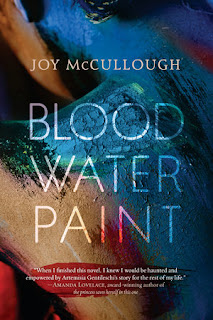 Her mother died when she was twelve, and suddenly Artemisia Gentileschi had a stark choice: a life as a nun in a convent or a life grinding pigment for her father’s paint.She chose paint.By the time she was seventeen, Artemisia did more than grind pigment. She was one of Rome’s most talented painters, even if no one knew her name. But Rome in 1610 was a city where men took what they wanted from women, and in the aftermath of rape Artemisia faced another terrible choice: a life of silence or a life of truth, no matter the cost. He will not consumemy every thought.I am a painter.I will paint.Joy McCullough’s bold novel in verse is a portrait of an artist as a young woman, filled with the soaring highs of creative inspiration and the devastating setbacks of a system built to break her. McCullough weaves Artemisia’s heartbreaking story with the stories of the ancient heroines, Susanna and Judith, who become not only the subjects of two of Artemisia’s most famous paintings but sources of strength as she battles to paint a woman’s timeless truth in the face of unspeakable and all-too-familiar violence. I will show youwhat a woman can do.

Review:
Listen: just read this book. You must read this one. (TW for sexual assault is the exception.)
This book truly makes you feel. You feel the messy, misleading, confusing, elating life of the artist. A friend of mine, when I recommended it, balked at reading a novel in verse, but the poetry is simple, sweeping you up in the mind and life of Artemisia. The chapters where Artemisia's mother tells her stories, in prose, seem slower at first, but the mother teaching her daughter how to face this world is so compelling, I found myself enjoying them just as much. Enjoying may the wrong word. Craving perhaps--as I imagined and mourned how women must help each other face the reality of our world, as I anticipated the triumph of the biblical women's stories. This book is searing. I meant to read it all at once but I had to put it down, as my dread grew. For the entire second half I was tearing up.
The author told this story as a play originally, and I could imagine how powerful the story would be enacted on stage. It holds that kind of magic as a book, the feeling you are witnessing a story, hearing the testimony of women's voices. It's wonderful that as a book so many more can experience Artemisia's story.
Posted by Leanne at 10:12 AM