Off Book: CITY OF GHOSTS by Victoria Schwab 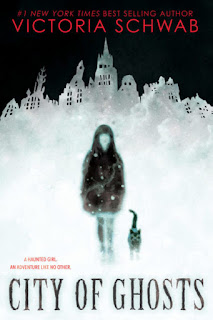 Cassidy Blake's parents are The Inspecters, a (somewhat inept) ghost-hunting team. But Cass herself can really see ghosts. In fact, her best friend, Jacob, just happens to be one.

When The Inspecters head to ultra-haunted Edinburgh, Scotland, for their new TV show, Cass and Jacob come along. In Scotland, Cass is surrounded by ghosts, not all of them friendly. Then she meets Lara, a girl who can also see the dead. But Lara tells Cassidy that as an In-betweener, their job is to send ghosts permanently beyond the Veil.

Cass isn't sure about her new mission, but she does know the sinister Red Raven haunting the city doesn't belong in her world. Cassidy's powers will draw her into an epic fight that stretches through the worlds of the living and the dead, in order to save herself.

I can't BELIEVE I was lucky enough to get a copy of Victoria Schwab's latest, her first middle grade book! Thank you, YALLWEST (I'll also have an ARC review of GRIM LOVELIES coming soon).

I read this the day after YALLWEST and really enjoyed it. I haven't read much middle grade since my daughter started reading too much and too fast for me to keep up reading ahead/with her, but CITY OF GHOSTS reminded me of some of my favorite middle grade from my own childhood. It made me think of my daughter's cousin Sid Fleischman, and his spooky, engaging stories, like The Ghost on Saturday Night.

The story starts off with exciting elements, particularly the ghost best friend, and keeps adding to them, exploring the system of ghost rules Schwab has established, all the while keeping it compelling to the main character, the relatable Cassidy. The book has a satisfying puzzle, but leaves things open for further books in the series, which I think kids will be eager for.

Schwab opens the ARC with a letter and says she likes scary stories, but is afraid of them. I don't think this book is too scary for most kids, but thrilling as it dips into different spooky locales (never with overwhelming description) and rises to a cinematic climax. I think CITY OF GHOSTS will meet the demand of my students who are always looking for more spooky stories.

Young readers will likely also enjoy the references to Harry Potter and explanations of American versus British vocabulary. And the exploration of supportive, if complicated, friendship is stellar. I also liked how the parents are present and a part of the story, something that I've seen readers asking for, rather than another orphaned main character.

The excitement for this ARC being handed out was great, the line very long, and I don't think that those who scored a copy, nor those who read the book when it comes out in August, will be disappointed.
Posted by Leanne at 5:21 PM