Off Book: SADIE by Courtney Summers 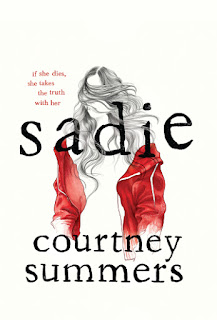 SUMMARY: (from CourtneySummers.ca)
Sadie hasn't had an easy life. Growing up on her own, she's been raising her sister Mattie in an isolated small town, trying her best to provide a normal life and keep their heads above water. But when Mattie is found dead, Sadie's entire world crumbles. After a somewhat botched police investigation, Sadie is determined to bring her sister's killer to justice and hits the road following a few meager clues to find him. When West McCray―a radio personality working on a segment about forgotten towns in America―overhears Sadie's story at a local gas station, he becomes obsessed with finding the missing girl. He starts his own podcast as he tracks Sadie's journey, trying to figure out what happened, hoping to find her before it's too late. Poised to be the next book you won't be able to stop talking about, Courtney Summers has written the breakout book of her career. Sadie will keep you riveted until the last page.

REVIEW:
I was so excited when I spotted the woman in the red hoodie at YALLWEST. I took a picture with her and therefore earned an ARC from Wednesday Books. (They ran out of copies at the booth and instead mailed me one right away, which was above and beyond!)

Kiersten White (who will always talk up others' books at events, one reason she's amazing) mentioned at the YALLWEST "Thrillers" panel that SADIE is so brilliant. I was looking forward to reading, but also dreading it a little. I'd heard how devastating Summers could be. But she always makes it more than worth it.

The structure of this book is innovative, and impressively pulled off. The podcast is presented as a script, in mostly alternating chapters with regular prose from Sadie's point of view. The format highlights themes of knowing, exploring how people understand and impact each other, and don't, from those they hear about in the news to their closest family. The writing completely drew me in, even as the reality it described was hard to look at. Summers so wholly realizes the world of Sadie, primarily poor Midwestern communities, and never sounds like someone looking in this world from the outside--or looking down at it. The book unflinchingly addresses the truth of girls' lives, but manages to never diminish them into something simply lurid or sensational. The humanity of Sadie and the other girls is a force.

The title character is someone the world ignores but who has a galaxy of love and hate and desire and repression inside her. Sadie says, "I'm dangerous," and that line resonates as you get to know her better and better. I don't even really know how to talk about this book, because Sadie feels so real. I made myself savor the book, holding off on finishing so I could have something to read at the park with my kids, but I still finished in a couple days and her voice just keeps living on inside my head.

This book will hurt, but also remind you of the power of women, which despite all the ways men and the world try to destroy it, is still out there, somewhere, hopefully.
Posted by Leanne at 4:54 PM